What do we use cookies for?
We use cookies and similar technologies to recognise your repeat visits and preferences, as well as to measure the effectiveness of campaigns and analyze traffic. To learn more about cookies, view our Cookie Policy. By clicking "Accept" or using our site, you consent to the use of cookies unless you have disabled them.

The Threads of Texas

A story of enduring identity in a changing state

The Threads of Texas is a research project launched by More in Common to understand change in Texas: the divergent views toward change that are pulling Texans apart, and the shared identity and dreams for the future that can bring Texans together.

Texas is continuously in a state of change — economically, politically, demographically. As Texas grapples with major changes, how do Texans across age, race, and political parties hold onto what they perceive as “truly Texan?” How does Texas replicate its DNA to maintain its sense of identity as new people, new ideas, and new industries make their homes in the state? These questions have become more urgent as the COVID-19 pandemic and the 2021 winter storm challenge the Texas social and economic landscape.

These are the questions that inspired More in Common to launch a landmark study of the state of Texas. In 2020 and 2021, we heard from over 4000 Texans from across the state, including experts in Texan culture and leaders of Texas industries. We capture the striking and ultimately hopeful attitudes of Texans: We find that although Texans on far ends of the ideological spectrum feel exhausted by political divisions, most Texans say that the ties that bind us are stronger than what divides us. They believe in a changing Texas where everyone feels they belong.

A New Way to Understand Texans

At the core of this study is a new way to understand Texans beyond traditional and demographic groupings. Tension in Texas is often perceived to stem from conflicts between urban and rural, newcomers and old-timers, or liberals and conservatives. These lenses have utility, but relying on them exclusively can obscure the nuanced reality that Texans hold diverse views, which are rooted less in their geography and political attachments than is frequently assumed.

The Threads of Texas research study offers a different lens on Texans – one centered on identity, values, and beliefs about tradition, change, and the future. We believe this lens can shape a way forward for Texas beyond entrenched lines of division.

Through deploying a methodology from data science widely used in commercial settings (i.e. hierarchical cluster analysis), this study finds seven groups of Texans distinguished by their orientation toward change–seven segments of Texans with unique construals of Texan identity, yet connected by shared values that unite newcomers and old-timers, as well as Texans of all races, genders, and ideologies. These seven segments are: 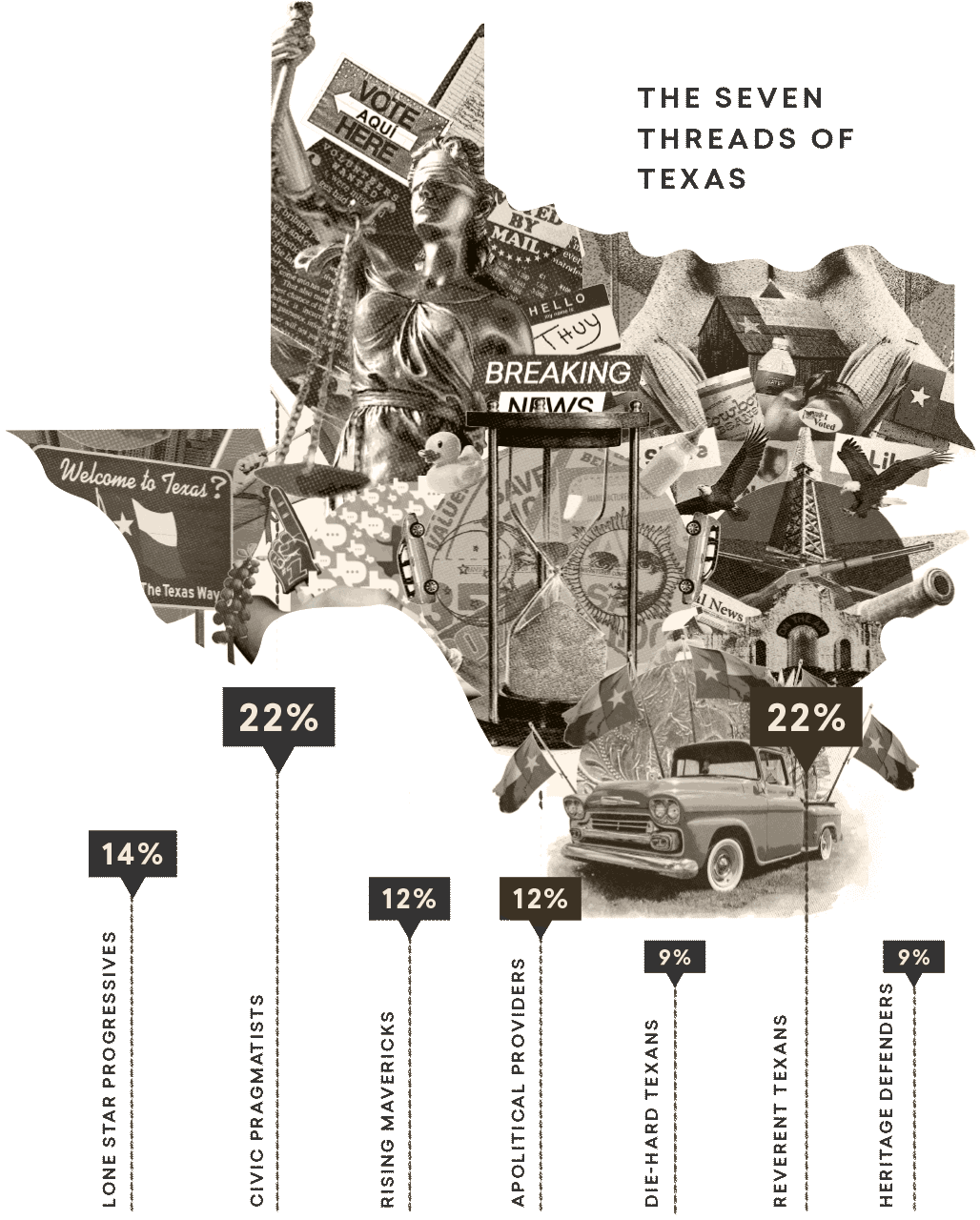 * Percentages correspond with the Texas adult population in each Thread of Texas. For more information on the breakdown of the Texas Threads by demographics and geographical locations, please see the appendix to the report.

The Texas that emerged from our research is not characterized by ideology, demographic or geographical splits, but by shared Texan values amidst shifting ideas toward what it means to be Texan now and in the future.

This study finds that behind a positive attitude toward the future, many Texans across generations, race and political identities are concerned about their place in the state’s future and worry about being left behind. Their excitement or concern toward change often maps to different social and political issues – race, immigration, education, economy, democracy, COVID-19 and so on.

Understanding the seven Threads of Texas, each with their distinct values and emotion toward change, helps us better understand the differences among Texans and the common ground for unity and meaningful conversations.

Even as Texans confront change, a fundamental Texan identity endures. The threads of this identity include a love of freedom, equality and diversity; the assertion that Texas is home and can be home for anyone; and a true commitment to neighborliness and community-building. This identity is embraced by all groups of Texans, whether they are young or old, wealthy or impoverished, rural or urban, Texan-born or immigrant, white or nonwhite, and conservative or liberal. Better understanding, elevating and affirming the common threads of this shared identity can help navigate change and address potential future conflicts.

The Threads of Texas is a mixed-methods research study conducted from July 2020 to February 2021. More in Common in partnership with YouGov surveyed a representative sample of 4,000 Texas adults, 263 of whom participated in the Spanish version of the questionnaire. We also conducted 12 focus groups and 15 one-on-one interviews with Texans from across the segments and various Texas communities. In 2021, we fielded an additional quantitative survey and message test to refresh previous data points, with a 1,000 respondent re-sample of the original N=4,000 sample.

We posed questions on Texan identity, the current and future state of Texas, and topical issues such as immigration, the state economy, racial relations and the 2020 Presidential election. To get to the why behind Texans’ attitudes toward change and the future, we included questions that captured core beliefs, such as Texans’ orientation toward individualism, sense of agency, and sense of belonging. Responses to these questions illustrate the motivations behind Texans’ perceptions of the future and toward issues that represent change.

We used a statistical analysis called agglomerative hierarchical clustering. Cluster analyses can uncover patterns that outline groupings and structures in the data, which in turn uncover contrasts and similarities that might not have been previously apparent. Our analysis revealed seven Threads of Texas, each with unique views toward the future of the state. Seven segments that represent a constellation of diverse attitudes, yet also share distinctive Texan values and goals for an ideal Texas.